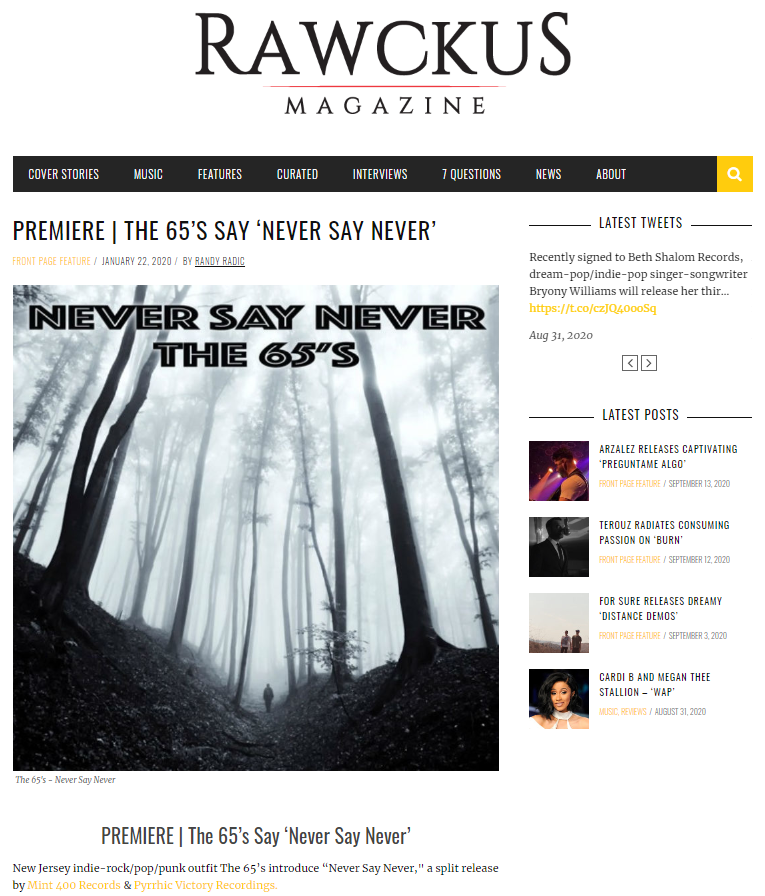 Made up of Joe Pugsley (vocals, guitar), John Steele (drums), Ryan Struck (bass, guitar, vocals), and Ed Roessler (guitar), The 65’s formed in 2009, after the alt-country band The Dark Brothers dissolved. Pugsley and Steele, who’d been playing with The Dark Brothers, decided to record some of Pugsley’s songs.

During 2009 and 2010, they laid down tracks while playing local live gigs, followed by signing with Dromedary Records, which released the band’s debut full-length LP, Strike Hard!

Described as “an amalgam of college-rock’s brightest moments” by Jim Testa in The Jersey Journal, a “delightful mix of styles” by Magnet magazine, and “affecting and impressive in equal measure” by Joe Wawrzyniak of Jersey Beat, Strike Hard! struck hard, making waves.

The album’s success inspired the band to begin work on new material, as they played throughout the region. In 2013, The 65’s dropped an EP, I Got You, as well as a music video for Pyrrhic Victory Recordings.

After I Got You, the band pulled back a bit, as other side projects began taking up more time: Joe and John with a surf-punk band called Galanos, while Ryan played with When Thieves Are About and pursued his solo project. Still, new music appeared, as The 65’s dropped another EP, New Fun Hell, in 2015. New Fun Hell showed the band going in a more potent punk direction. Then in 2017, The 65’s dropped a two-track EP, Wolves and Men.

“Never Say Never” opens on discharges from gleaming jangly-lite guitars riding a flam-like snare. As the harmonics flow, the melody takes on pop-punk energy flavored with alt-country-lite hints, forging a beguiling, mesmerizing sonic soundscape, as if The Byrds fast-forwarded to 2020 and decided to play pop-punk.

With their jangly pop-punk sound, The 65’s pump out muscular refined dynamics fused with a contagious rhythm and tasty scratchy vocals.