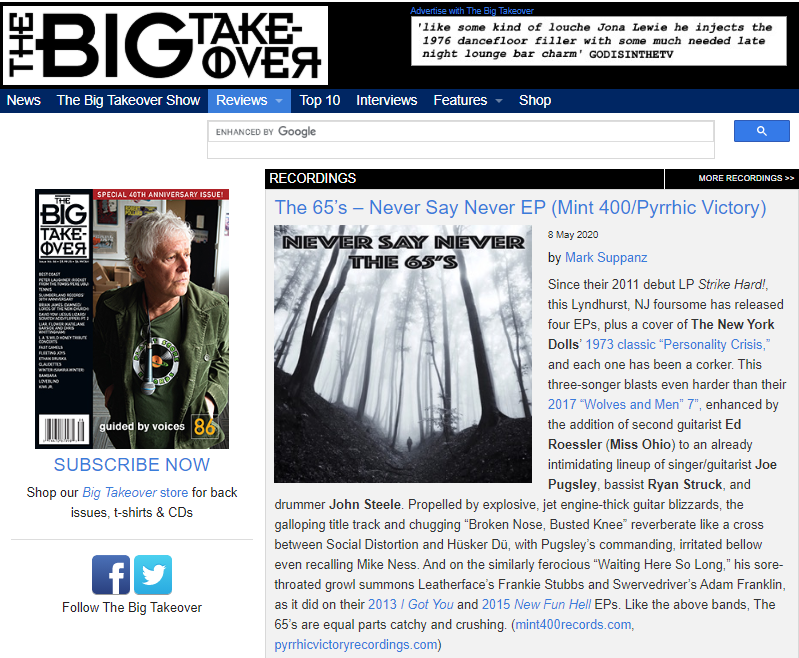 "The 65’s are equal parts catchy and crushing."

Since their 2011 debut LP Strike Hard!, this Lyndhurst, NJ foursome has released four EPs, plus a cover of The New York Dolls’ 1973 classic “Personality Crisis,” and each one has been a corker. This three-songer blasts even harder than their 2017 “Wolves and Men” 7”, enhanced by the addition of second guitarist Ed Roessler (Miss Ohio) to an already intimidating lineup of singer/guitarist Joe Pugsley, bassist Ryan Struck, and drummer John Steele. Propelled by explosive, jet engine-thick guitar blizzards, the galloping title track and chugging “Broken Nose, Busted Knee” reverberate like a cross between Social Distortion and Hüsker Dü, with Pugsley’s commanding, irritated bellow even recalling Mike Ness. And on the similarly ferocious “Waiting Here So Long,” his sore-throated growl summons Leatherface’s Frankie Stubbs and Swervedriver’s Adam Franklin, as it did on their 2013 I Got You and 2015 New Fun Hell EPs. Like the above bands, The 65’s are equal parts catchy and crushing. (mint400records.com, pyrrhicvictoryrecordings.com)